The Victor Bailey Scholarship honors the life and legacy of a creative giant of the bass world. Though he passed away in 2016, the bassist, composer, educator, and painter left behind artistic contributions that will live on. 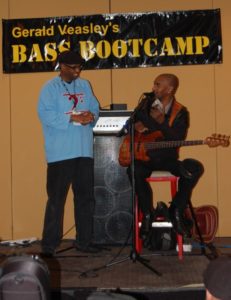 Victor was noted for his prodigious technique, versatility, and uncompromising musicianship. Whether playing with Hugh Masekela, Weather Report, or Madonna, Victor’s sound and style were instantly recognizable. He played with a distinctive voice all his own.

Victor Bailey was also committed to music education. He served on the faculty of the Berklee School of Music as an associate professor in the bass department. Victor also taught at the Bass BootCamp starting with the inaugural camp in 2002. There he developed an affinity for sharing his knowledge and experience with up-and-coming musicians.

Months before Victor’s passing he had planned to return to the Bass BootCamp to teach and to also display some of his paintings. His illness prevented him from traveling to Philadelphia for the 2016 event, but he was apparently thinking about the Bass BootCamp at the time.

After his passing, we received an unexpected call from his sister, Brenda, that brought us to tears…Victor had left a donation to Bass BootCamp in his will. In his honor, we established the Victor Bailey Scholarship to help deserving young musicians attend Bass BootCamp.